That’s great news, especially since last year it had passed both houses.

I am sure that regardless of whatever might happen in the election, this bill WILL be back next year.  We’ll need to prepare between now and next session for that effort.

Maryland gun owners should be proud of the work done this session.  Without your action and with the politicized school shootings that have occurred this year, I believe bills like this “Gun Free Zones” bill would have breezed right through both chambers.

But for the moment, I need your help in calling Governor Hogan immediately on a bill that is just about to become law.

The House of Delegates passed HB-1302, the “Red Flag” Gun Seizure bill, late in the evening last night so now the only thing standing in the way of this bill becoming law is Governor Hogan’s power to veto this legislation.

Will he stand up for gun owners and the Second Amendment?

As we’ve told you, Hogan has made comments supporting a “Red Flag” law and gun control in the past.

We are very concerned that Hogan is more interested with appeasing liberals in an election year than standing up for what’s right.

But we would be very glad to be proven wrong in this case.

Regardless of what Hogan does, we must make our voices heard to Hogan. 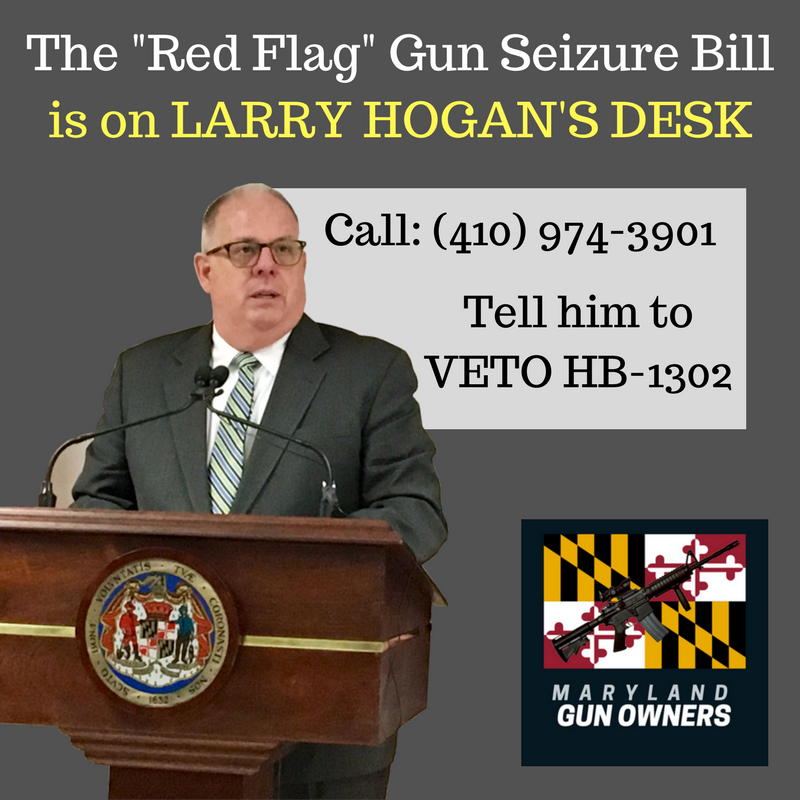 I will say this though: a lot more Republicans voted against House Bill 1302 this time around than the first time.

That’s because you guys lit them up for stabbing gun owners in the back.

Interestingly though, there were still some Republicans who decided to double down on their support for HB-1302.

When you make your call to Governor Hogan today, shoot us a quick email to let us know how it went at marylandgunowners@gmail.com.

P.S. Regardless of what Governor Hogan does around House Bill 1302, one thing is clear: it’s pay back time in Maryland.

Maryland Gun Owners is ready and raring to go to hold politicians accountable for:

We don’t care what party they are in, whether or not they are “hunters” or what their NRA rating is — if they voted against our God-given rights, they deserve to be held accountable for it.

Join Maryland Gun Owners today to take action across our state in defense of the 2nd Amendment.

In the coming months between now and next year’s General Assembly, we are going to need your help more than ever to send a message to legislators that we will not accept their constant abuse of our God-given rights.