The Wall Street Journal recently reported that Dick’s Sporting Goods sales are down.

They attribute this to the company’s exit from the gun market with their prior announcement that they would cower to the Gun Control Lobby.

The message from the Second Amendment community is clear:

Law-abiding gun owners are not the target and should not be treated like outcasts by large corporations desperate to appear politically correct. 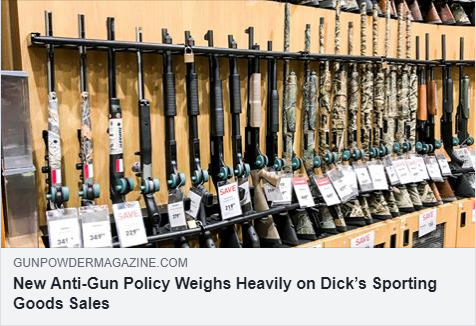 It’s October 2018 and at the beginning of this month new gun control took effect.The most onerous bill that is now officially law in Maryland is the infamous “Red Flag” Gun Confiscation law passed by the legislature and rubber-stamped by Governor Hogan.

Sadly, as Maryland Gun Owners informed you, many Republicans went along with Democrats in the General Assembly to pass this terrible law.

And now there is more bad news.

The main impetus behind the legislation is claimed to be that these guns have no serial numbers and are “untraceable.”

This is another example of “feel-good” Annapolis legislation designed to make people think politicians are doing something when in reality this law won’t do anything to prevent gun violence in our state.

“It has always been legal for someone to make their own gun in this country,” Dave Kopel, adjunct professor of constitutional law at Denver University’s Sturm College of Law, told Gunpowder Magazine. “There’s no change there. Putting aside the Defense Distributed issue, there have been many sites that host this sort of information for years.”

If this information has been out there for years, then why haven’t we seen a surge in 3-D gun violence?

Maybe its because plastic guns are just not quality self-defense weapons.

“The most economical way to print a gun is to use thermoplastics, but doing so makes the firearm as much of a danger to the user as it is to everyone else.”

Trust me, if 3-D guns were such easy, cheap, effective guns we would see them in widespread use by criminals already.

But we don’t.  And although there are 3-D metal printers that DO produce reliable guns, those are insanely expensive.

“If you want a gun for self-defense purposes, you want one that shoots straight and operable and can fire more than a couple of rounds.  It is not clear that many of these guns can.”

Exactly, so why are Brian Frosh and the liberals proposing this needless legislation?

Liberal House Speaker Michael Busch (D-Anne Arundel County) already pledged his support for this legislation even though it hasn’t been drafted yet.

He says he supports it in response to the Capital Gazette shooting, however, as he surely knows, a ban on 3-D guns would not have changed the outcome of that horrific tragedy because the assailant used a shotgun, not a 3-D gun of any type.

And, of course, in typical fashion, Larry Hogan has already rushed out publicly to support this ban on 3-D guns, again before a draft of the legislation has even been written.

This whole issue is about politics, not saving lives.

Democrats (and Hogan) in Maryland believe it benefits them politically to pass gun control of any form — so that’s what they will do unless gun owners in this state make a stand.

The ink is barely dry on the Bump Stock Ban and the “Red Flag” Gun Seizure bills they passed last session.

Yet Democrats (and Hogan) want to pass a new round of gun control.

And don’t forget, in addition to this 3-D gun bill, we already have:

I wish I had better news for you, but we are facing an onslaught of anti-gun action here in Maryland.

Please sign your No Deals, No Gun Control in 2019 Petition today.

And forward this email to a Second Amendment supporter that you know in Maryland.

The more people we can mobilize in each district across Maryland, the more impact we can have on these politicians.

If you don’t have folks in their district, if you don’t present an ability to deliver political pain to these guys — they are not going to go your way on the gun issue.

The Gun Grab Lobby in this state is very organized and well-funded and if we want to compete with that, we must do the same.

After you sign your petition, I hope you will chip in to Maryland Gun Owners to help us in 2018 and beyond to deliver the pain to politicians who would vote away our Second Amendment rights.

P.S. 3-D guns are in many cases either unreliable compared to commercially manufactured guns OR they are cost-prohibitive to make versus just buying a gun.

Plus, it is already illegal to have an “untraceable” gun in our country.

And on top of all of this — Maryland is one of the most anti-gun states in the country — why do we need more, needless gun control?

We don’t.  And if you turn on the news tonight to hear coverage on Baltimore City you will understand yet again that the Gun Grab agenda in this state hasn’t worked.

Please sign your No Deals, No Gun Control in 2019 Petition today.