The ink is barely dry on the last round of gun control passed in the 2018 Maryland General Assembly and yet calls for more gun control are already under way in Maryland.

Most recently, the Democratic candidate for Governor, Ben Jealous, went on MSNBC and hinted at the idea of a shotgun ban and said that we need to go “much further” in Maryland to ban guns.

“Much further?”  What does he mean by that?  How much further can an anti-gun state like Maryland really go? 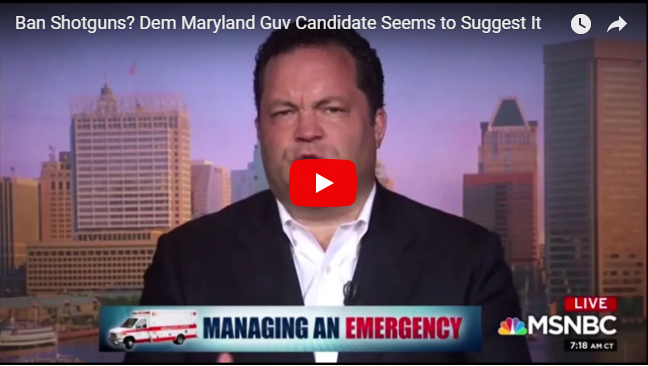 This is bogus, crazy talk.  I almost did not believe this until I heard what he said on camera.

This is nothing more than a knee-jerk reaction to tragedy playing upon peoples’ emotions.

The philosophy of “It was used to commit a crime, so let’s ban it” was used with the bump stock ban.

And yet, we see with the Capital Gazette tragedy that you can ban bump stocks and AR-15s and pass magazine bans — and people will still find ways to harm one another with some other type of weapon.

In Britain, they’ve all but banned guns and do you know what they are contemplating now?

In London, they are considering a knife ban since such violence has increased since they banned guns.

We do not need more gun control, we need less.

Rolling back prior gun grabs should be the topic of discussion in Annapolis.

We don’t need to go from a bad situation for gun rights in Maryland to total insanity.

Between this talk from Ben Jealous, Larry Hogan’s constant betrayal of gun owners and the legislature’s attempts to pass new “Gun Free Zone” legislation, we are under constant attack here in Maryland.

The only way to push back against the Gun Grabbers is for gun owners to unite, expose the hypocrisy of politicians and show these elected officials that there is a price to pay for voting against our 2nd Amendment rights.

When we reward bad political behavior, why should we be upset when the politicians in both parties continue to do the same thing time and time again?

Please help us to continue to grow the gun rights movement in Maryland to counter the rapid growth of the Gun Control Lobby.

P.S. Maryland has embraced the gun control agenda for years and years.

What do we have to show for it?

The laws designed to target the bad guys end up penalizing law-abiding citizens the most because they are the people who actually follow the law in the first place.

Responsible gun ownership is not a crime, it should be encouraged across our state.